Mistress Sofya Gianetta di Trieste, our provincial Minister of Arts & Sciences, shares with us an update from this summer’s Pennsic War:

At Pennsic, on Tuesday, August 8th, the children of Østgarðr made a wonderful gift presentation to the King and Queen. Led by the drumming of Lady Angelica di Nova and the singing of Hlaefdige Alienor Salton, Østgarðr supporters and residents, the children pulled a wagon carrying two large dragons (one purple and gold, the other green and white) stuffed with mini dragons, princesses, puppets and games for the children’s largesse. The King and Queen of the East were delighted and appreciative of the gifts. I want to thank all who contributed to this presentation. 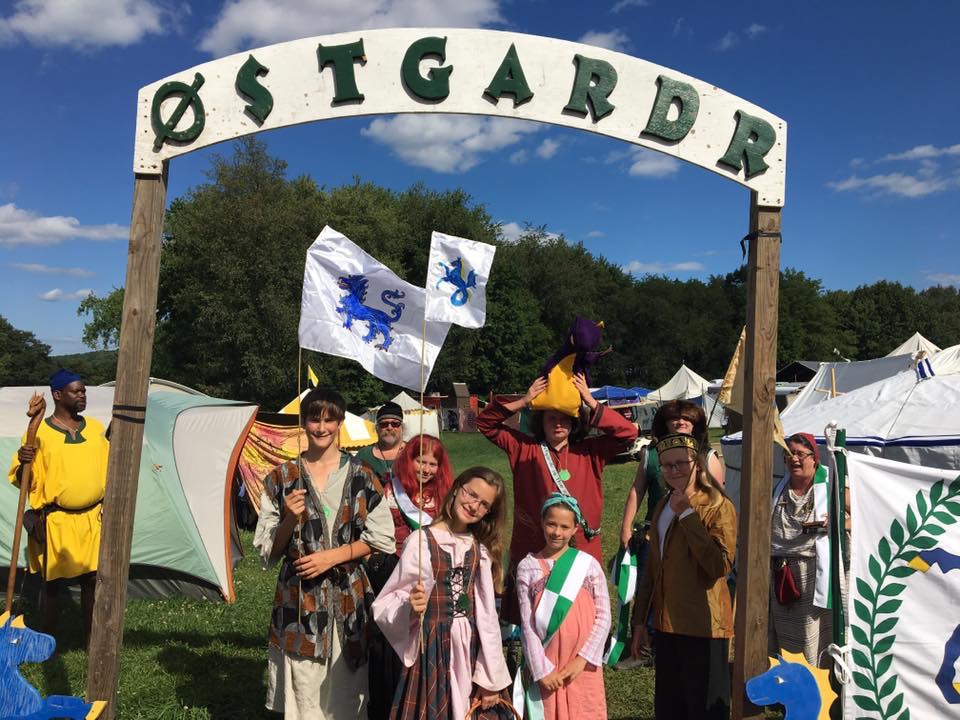 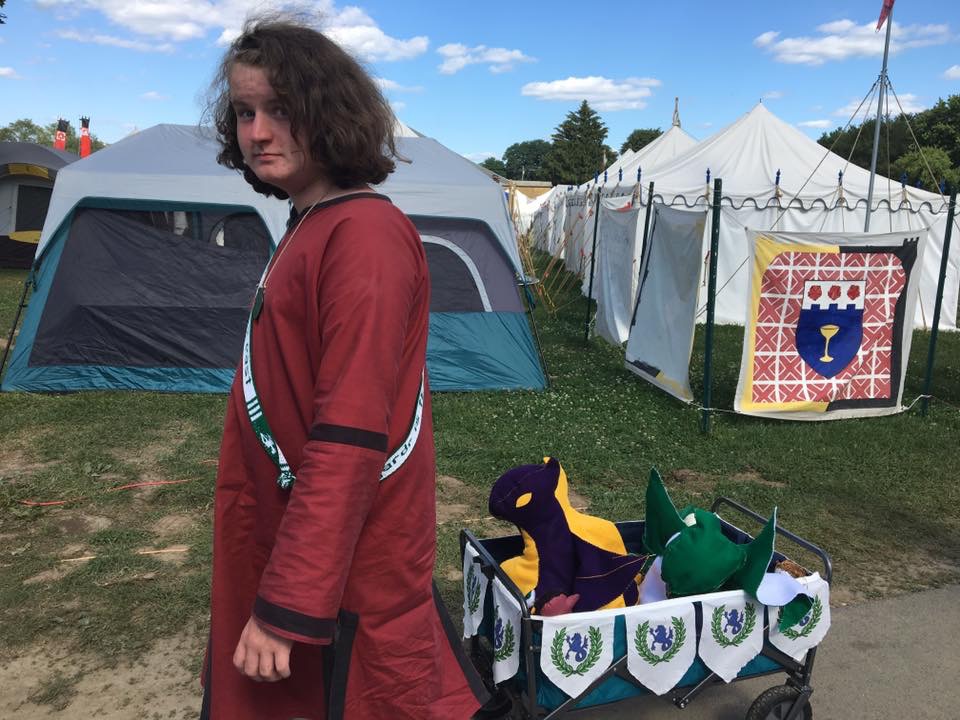 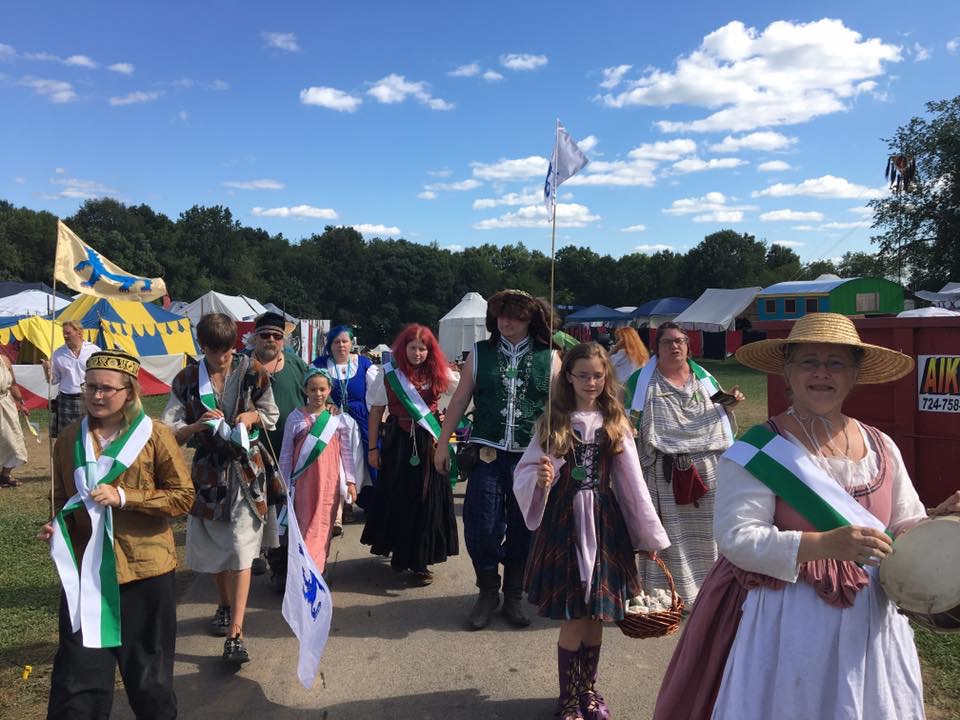 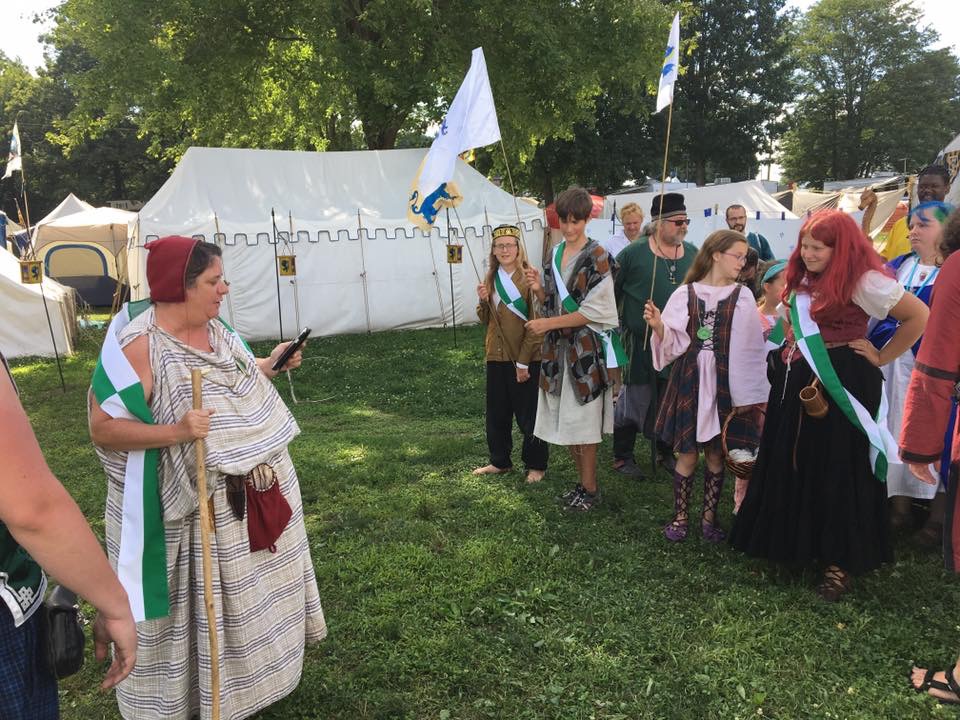 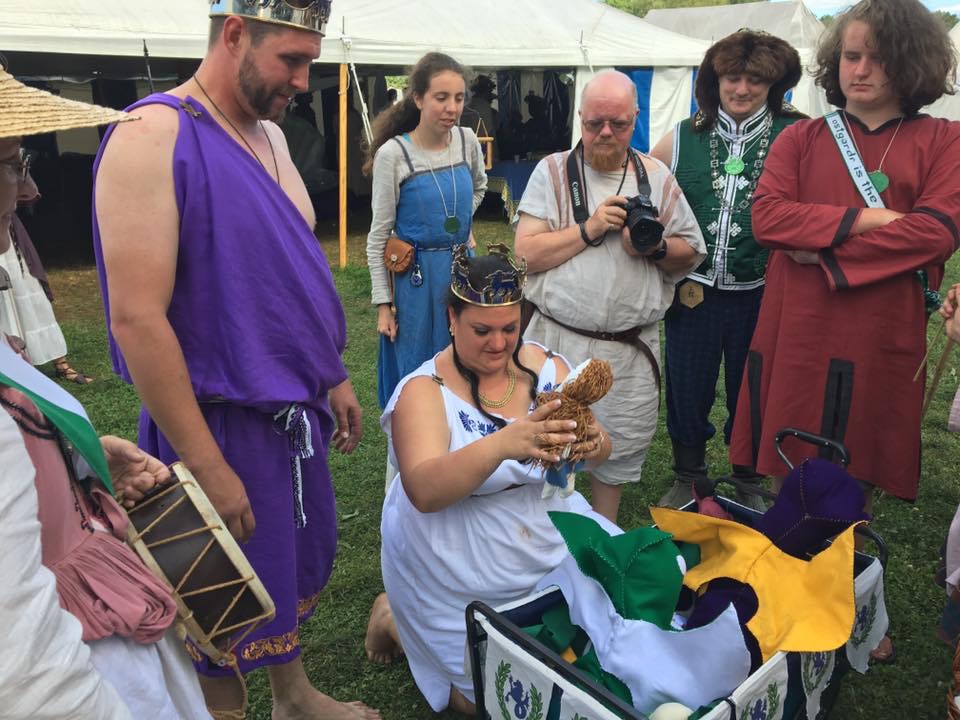 ​Lady Alienor’s words as sung to the King and Queen during the presentation:

Sing a song of Østgarðr!
​We captured these two dragons;
​Freed a score of princesses &
​Put them in our wagon.
​When you cut them open
​You loose the baby dragons.
​Isn’t this a grand largesse
​We carry on our wagon?

​Our king’s in his encampment —
​We call it EK Royal.
​Our queen is seated with him,
​A handmaiden loyal.
​Your subjects come before you,
​Bearing gifts for children.
​We hope you will accept our gifts
​And do not beat our children!

Many individuals from Østgarðr shared their time, knowledge and skill by teaching a class or several classes at Pennsic. Thank you all for volunteering!

Benjamin:
• Dancing for kids by a kid

Bish, seneschal: office is coming up for election at the beginning of the year. We will need a new seneschal. Bring the information to your canton commons. Candidates should have letter of intent in by October Commons. Vote in person or via written proxy at the November Commons. Office starts in January. Other positions expire this year. Some discussion over when Angelica’s term as exchequer expires — this year or next year?

Erich, MoL: we had lists. Role of MoL is to help any fighters or fencers who need help running lists, to assist the marshallate of the respective field. Has paperwork in case they forget theirs. No reports received or sent. Exception would be at an extremely large tournament — if event does not have an MoL, he will supply it, but you have to reach out to him in advance.

Angelica, exchequer: we have money. Note to cantons: there will be a review of books (canton & provincial) coming up shortly, by EK.

Alienor, seneschal Whyt Whey: had to submit a 2nd insurance certificate specifically for the parks dept. w/ special wording. Was subject to corporate late fee, grrr. Beatrice will speak to royals tomorrow about their needs for the demo & ask for a contact name. Mongu says they may have a 12×18 travel pavilion. Festival organizer wants to put an archery range near us??!? Have expressed consternation. Still collecting parking pass info; thank you to everyone who is opting for public transit instead. Please let Alienor know if you need stuff picked up before the event.

Oct. 28th Whyt Whey Schola is on. Hosting it ourselves due to site search failure (selected site tried to charge us 30% more than their advertised rate). Is on EK event calendar. Brief discussion about insurance requirements, since we are too late to be in the Pikestaff, this cannot be an official event. However, we are not handing out awards and do not need an insurance certificate. Alec suggests we call it Schola in the Solar! Acclaimed.

Banners (new Whyt Whey device plus 2 personal arms) printed by spoonflower.com on polyester chiffon. $40 for 2 yards. Device passed 2 weeks before Pennsic and we were able to fly the banner at Pennsic. See Mathghamhain if you need assistance generating artwork to be printed via spoonflower.

We have the sheetwall from the EK royal encampment with the old device. Will display at EK 50th, then pass to the historian for archival. Will be making new sheetwall to present to royals at next Pennsic.

Mathghamhain, youth combat: fighting at Barleycorn included 6 fighters, one of whom was new (from Aethelmarc). Marshalled at River War, received donations of loaner equipment there. Identified some items to purchase to round out the gear to have 6 full sets. Rounding up kids for Queens Farm & Cloisters. Will be bringing the pell. Goal is to run some practices this fall. Coordinating with kids who want to do it & their parents to see if we can do Wednesdays near fencing / dancing or Saturday afternoons in Central Park.

Meeting interrupted by call from Viceroy. Bish told him we are more than halfway through officer reports. He is too far away to join us. Traffic is working against them.

Viceregal report (phone): Barleycorn was fun; thanks for showing up.

Alec, fencing: there was fencing at Barleycorn. Brendan Firebow (of Staten Island) is new champion. Allocated marshals-in-charge to 3 events (Yehuda at Barleycorn, Marion at Queens Farm, Alec at Cloisters). Beatrice reports 2 of the new fencers’ armors have been made. There are 2 more in the queue. Practice in Central park the last couple of weeks is going well. Have decided to try a new area further down the path — has better lighting.

Wishlist of loaner gear for the fencers: a couple of loaner masks for new people, a couple of gorgets, 2-3 pairs of gloves, a loaner sword. Total expenditure would be about ~$600-650 ($100 masks, $110 gorget, $60 gloves, $175 for the sword). Will suggests making our own gorgets; already have 3 loaner gorgets. Marion has a loaner mask passed to her by Bish at a Commons earlier this year. Will need loaner gloves in several sizes. Jackie asked about fundraising efforts — split the bill w/ Østgarðr. Thomas suggested putting out a donations bucket at Queens Farm. Consensus was that it would be better to do so at an event rather than a demo. Prefer to avoid taking money from non-SCAdians. Alec suggests bidding on a fencer at a tournament to raise money. Winners get a small prize, both fencer & bidder. $$ goes to fund.

Indoor site for fencing practice needed! Site search has turned up places that will accept anything but fencing.

Richard, historian: Brendan Firebow won provincial fencing champion. Ervald ran thrown weapons challenge tourney, however there was no winner because he didn’t know what the requirements were for being a champion. Discussion of whether there should be a minimum score. Mongu presents strong argument against it, to forestall situation where champion maintains position for 8 years. Richard suggests leaving to discretion of viceregents, as it is their champion. Final javelin throw at Barleycorn was an amazing finish to the contest. Archery champion Conor Ó Ceallaigh, who also became a member of the order of the sea lion.

Bish asked if Richard had been asked for material for EK 50th. Richard says yes, he will be submitting artifacts. Encourages others to do likewise.

Thomas, seneschal Northpass: Barleycorn went well. No negative vibes. Money still being worked out; think they broke even. Very labor-intensive. Thomas is at the end of his seneschal term (2 years). He will not be seeking a second term.

Mongu, herald: tournaments at Barleycorn. Conor Ó Ceallaigh became a companion of the order of the sea lion. Mathghamhain asks if there were order of precedence change lists from the order meetings. Lada took the notes; will check with her. Past reports have been that having the web order of precedence updated has not happened. Mathghamhain successfully put in 2 change requests that were handled within 24 hours. Will move forward with doing more. Richard as historian has info on what happened when, and can supply dates. Mathghamhain will email Richard & then put through the updates as needed.

Mongu, archery (unofficial): archery is happening. Long Island practice is sporadic. Staten Island is similarly sporadic, being held between events and on an RSVP basis. Will be having practice this Sunday (day after tomorrow). Next week is Queens Farm & then Cloisters, then 3Gs, then Goats Tavern (may or may not hold practice that Sunday). Check the Facebook page to see if practice is being held, and text or call if you are attending.

• Favors for 50th: 1st set of Ostgardr 50 year favors have been completed! On Sunday, August 27th TeamOstgardr came together and finished close to 100 favors that were distributed at Barleycorn. Thank you Alienor, Beatrice, Angelica and Anneke for taking the time out and energy to make this happen. Production on another 100 favors will begin in October for distribution prior to the East Kingdom 50 Year celebration.

• Favors for the Princess: ​Princess Matilde’s favor design is available and ready to be made. Below is the pdf link you can ​download: ​http://im.eastkingdom.org/wp-content/uploads/2017/08/MatildeFavor.pdf ​Keep in mind you do not need to embroider them! You can paint them, stamp them or bead ​them. Get creative!

• EastKingdom50: Please send me your photos for the EastKingdom50 year celebration June 28th thru July 1st, 2018. Please let me know if there is something you would like to share and send to ostgardr50 at ostgardr.eastkingdom.org. Thank you to all who have submitted so far.

Rufina, chronicler (email): E-Horse is out. We held it until after Barleycorn so that we could include any Provincial awards given in Viceregal Court. We will not be at An Dubh investiture [family visit; see above], so if someone could report back to me about awards given at Court, I’d be grateful 🙂

Queens Farm: Saturday & Sunday of next week. Ian is autocrat. Mongu asks if there will be thrown weapons at Queens Farm. Unsure if there is an archery marshal in charge. Marion is fencing MiC, Erich is running one or more tournaments.

Goats Tavern: Thomas reports that more classes are being created. There will be no live goats at the event. Information on the calendar event listing is minimal. Is a family-friendly schola with lots of socializing. Thomas will nudge the autocrat to update the description. Encourages Alec (who was curious about the event) to also call the autocrat and ask for more information. There will be youth combat.

Thomas urges us to pitch in more with general site cleanup, post-event, to support the autocrat & seneschal.

October: Mongu Chinua
November: Alienor Salton (unless someone from Queens or Brooklyn wants to volunteer to spread things around geographically)
December: no meeting

Richard, seconded by many.

Chamberlain (DK):
still have tent, feast gear is in Northpass

Nordenfjord:
Erlan is Acting Seneschal (Aethelstan has just stepped down); sent in request for warrant just before Pennsic but haven’t gotten reply yet. Have filed for status restoration. Bylaws say election in September. Erlan has been nominated for EK Chancellor Minor, effective December, so she won’t be running for Seneschal. Most likely candidate is Kaylee (sp?).

Brokenbridge:
no news, except fighter practice is happening.

Historian:
Did anything happen at Pennsic? (Various people answered.) Give me stories & tales.

Chatelaine (Rowan): Gold Key seems to be in good shape. There was a Chatelaine’s meeting at Pennsic; nobody went. Making more G&W fencing arming jackets (pattern has been approved by fencing marshals). Send newcomers to me. Running low on business cards.
Seneschal:
At Riverfest, there was no Chatelaine’s table; need Chatelaine kit.

Archery:
resuming at Cedar Creek & Staten Island. Have FB page “statenislandarcherypractice”. Practice has been slow (down from 10/week last year to 4/week).

RECENTLY PAST EVENTS
nothing recent. Blood & Axes at Veterans’ Memorial Park: cheap, happy to have us, but no kitchen.
UPCOMING DEMOS
Nordenfjord demo on Thursday, Oct. 12 at Empire State College in Nanuet; could use additional demo-ers. 6:30-9:00 PM. Ft. Tryon Oct. 1. Request parking passes by Aug. 25. QCFFD Sept. 23-24. Doesn’t seem to be on EK calendar yet; Mitch will investigate.

UPCOMING EVENTS
Musicians’ Day not happening due to lack of dates.

Barleycorn: assembling lots of cooks, staff, etc. Enclosed room for A&S & musicians (directors’ cabin btw. archery & beach); discussion of how this meshes with archery. Art gallery (?) Gate is at director’s cabin at corner of field (other side of bridge).

Next week at Michelle’s in Hawke’s Reach: Ask The Bishop about Research.

UPCOMING COMMONS
Sept. 15 at Piglet’s in Manhattan
Oct. 20 at Kapajs’ in Bronx
Nov. 17 at Mungu’s in Staten Island

Get Updates via Email